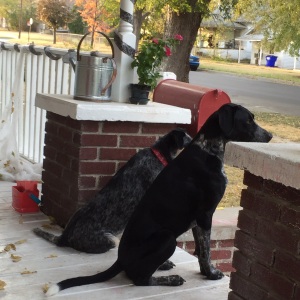 One night this week I was enjoying a beautiful fall evening by sitting on the front porch and reading.  My son and daughter-in-law’s dogs, Stetson and Milo, were being incredibly good, just sitting on the porch watching the after-work traffic pass by.  I had set the book aside, watching them and thinking what good dogs they were when suddenly Stetson jumped up and ran right out into the street. He thunked against the side of a red sedan as I jumped up, yelling his name. As quickly as he’d darted out, he was back on the porch standing close to my side. The woman driving the red car pulled over and got out.

Are you sure? she asked as she walked around to see if there was any damage to her car.

“He’s fine,” the neighbor said. “He just hit the side. He’s alright. Now if it had been head on, that would have been a different story.”

Stetson stood beside me acting like nothing had happened. I was glad nothing serious had! How would I explain to my son that I hadn’t just dinged the running board on his brand new truck? No, this time I’d let his dog get hit by a car.

This incident reminded me of another dog and his traffic accident in 1997.  Like the other Flashback Friday installments, the proceeding column was first published in the Chester County Independent.

We recently drove to Wyoming to visit family. We took our horse trailer since we hadn’t had room for everything when we moved. My husband also decided that we needed to bring our dogs, Haley and Zeuss. They made the 1,300-some miles to my sister’s house in the padlocked horse trailer.

After two days in Douglas, we continued the one hour to Casper. We thought no further than we were going, the dogs would be fine in the back of the truck. Zeuss kept standing on the tool box, so halfway to Casper, we pulled off the interstate and put both dogs back in the trailer. Tom didn’t padlock it.

During the course of the last few miles we made a sharp turn, crossed a bumpy intersection and stopped at two red lights. While we sat at the second light, I saw the tail of a black dog pass in front of us. Tom realized it was Haley and jumped out of the truck to put her back in the now open trailer.

“We lost Zeuss somewhere,” he said.

He quickly drove the last several blocks to his mom and dad’s house, parked on the wrong side of the street, and ran to the door, shouting, “Mom, I need your car.”

Tom searched for Zeuss unsuccessfully until nearly 2 a.m. First thing Monday he called the pound and was told a dog matching Zeuss’ description had been picked up at 1:30 Sunday morning.

Tom took $50 and went to bail Zeuss out. It wasn’t long before he called saying he needed more money. Zeuss had hurt his legs when he jumped out of the trailer and been taken to the vet and given an IV and pain killers.

When Tom returned with a perfectly healthy Zeuss, he said, “Well, our free dog just cost us a lot of money.”

I grumpled about the dog blowing our travel budget, until I was able to put things into perspective. The price we paid for Zeuss’ freedom was pretty paltry compared to the price Jesus Christ paid for ours.

One of the first verses children learn in Sunday School is John 3:16: “For God so loved the world that he gave his only begotten son, that whosoever believeth in Him should not perish, but have everlasting life.”

God didn’t just give us his son to live among us and teach us His principles. He gave him to die for us.

Adam and Eve had done some pretty serious damage to man’s relationship with God. In order to correct the damage, an atonement had to be made. Since man had caused the breach, he would have to span it, but since the break had been made with God, human efforts were not enough. The solution was for God’s holy son to become a man.

During the time before Christ’s birth, men made sacrifices of lambs to God. Christ put himself in the position of the lamb, and became the ultimate sacrifice.

A vet bill is pretty measly, isn’t it?