When I published my first blog post Saturday I was happy, excited, hopeful, well rested…

It’s 10am Monday in Dublin, Ireland. I’m exhausted. I have a headache. I’m discouraged, frustrated, and just about ready to take the next flight back to Wyoming. Of course, after my bag shows up and I get a shower and some rest, I’m sure I’ll be fine. Right now though, I’d like to single-handedly take down United Airlines.

Saturday I arrived early at the Savannah, GA airport after enjoying a few days on Hilton Head Island with my REALTOR colleagues and my #1 son. I was well-rested, well-fed, showered, and dressed comfortably with hair and make-up in fine shape. My bags were checked and boarding passes printed. And then the crew from IAD was two hours late getting to SAV. They arrived in Savannah at the same time we were supposed to be landing at Dulles.

The Savannah staff was great. They made sure we all had snacks and water bottles since all the shops and restaurants were closed. They rebooked 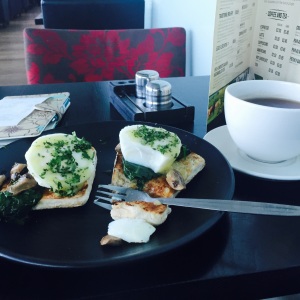 What a 14 Euro food voucher buys at the Dublin Airport

as many people as they could and turned the flights around in record time. We headed toward Dulles and I prayed my connecting flight would be running late enough I’d be able to make it.

Fifteen minutes is all it took to throw off the beginning of a long-awaited and much needed vacation. My flight left without me and I spend the next hour in line at customer service. They set me up with a $7 food voucher that I couldn’t use because everything was closed. They booked me in a hotel, gave me a voucher for a taxi, rebooked me for the next day and assured me my bags would be sent out with me the next day. Just one problem though, the connecting flight in Dublin wasn’t their concern, according to my customer service provider. The Ireland domestic flight from Dublin to Donegal is on a different airline, so as far as he was concerned, it wasn’t his problem. He suggested I call my travel agent. Yeah, sure, at 1am Sunday morning. I’m sure she’ll answer.

I made my way to baggage claim to see if by some miracle my bag was there.  It wasn’t. The lady at the baggage claim counter said it would go out the next day when I did. In the meantime she had a lovely eco-friendly personal hygiene kit for me.

It was easy enough to find the taxi, but the driver didn’t know where the hotel was and thought it might be a good idea for me to go back inside and ask. He’s lucky I didn’t choke him, or just knock him out and drive the taxi myself. I showed great restraint and suggested he call the phone number listed on the note customer service guy had given me or enter the street address into his GPS. He did both and managed to get me to the Courtyard by 1:30am. I slept for nine hours in a king sized bed before getting up and starting the whole airport adventure all over again.

Fast forward to now. All of the second day flights were on time and I made it to Dublin with no issues – and no connecting local flight, no bus ticket, and no bag.

Three service counters later, I have a ticket on the next flight to Donegal and a $14 euro food voucher. I should make it to Donegal by 3pm. But if my bag isn’t there within 15 minutes of my arrival, United is buying me a new wardrobe. Yoga pants and sports bras are great, but I hadn’t planned on wearing the same clothes and flip flops for two weeks.

Handsome Irish guy at counter two told me if my bag doesn’t arrive with me in Donegal to buy what I need and save the receipts for reimbursement. We’ll see how much difference 15 minutes can make to United Airlines.